For the majority of businesses, making the switch to NBN (the National Broadband Network) can be challenging. This is often because it means switching from an existing ADSL, cable modem or satellite services to an NBN solution. NBN’s internet services utilize a various technologies, often collectively referred to as Multi Technology Mix (MTM). These include:

FTTP (Fibre to the premises)

FTTN (Fibre to the Node)

This is the most common implementation of the NBN and uses existing copper cabling from a DSLAM (Node) in the area leading to the premises. The fibre node is generally located in a cabinet on the street somewhere within a kilometer of the premises. Beyond this, copper cabling runs from the node to premises to provide phone and internet services. The technology used for this “home stretch” is called VDSL (Very high speed digital subscriber line), similar to ADSL, but faster over short distances. It is worth noting that VDSL does require a specialised modem to run on it.

FTTB (Fibre to the Building)

Sometimes referred to as “Fibre to the Basement”, this set up is very similar to FTTN with the exeption that the node is placed somewhere on the premises (usually a communications room in the basement, hence the name). VDSL is employed from the node just like a normal FTTN implementation.

FTTC (Fibre to the Curb)

This implementation also utilises copper cabling to the premises but the DSLAM is replaced by a DPU (similar device called a Distribution Point Unit) and is located a shorter distance from the premises (in a pit on the street outside the premises). The DPU requires power from the premises using the same copper cables that the data is transmitted over. The technology used for sending databetween the DPU and the connection box is another type of DSL technology called G.Fast. The connection box itself in this case is a type of modem which can support the G.Fast connection as well as power the DPU in the street. The ISP often provides a router/gateway to connect to the NBN connection box to provide the internet and telephone services 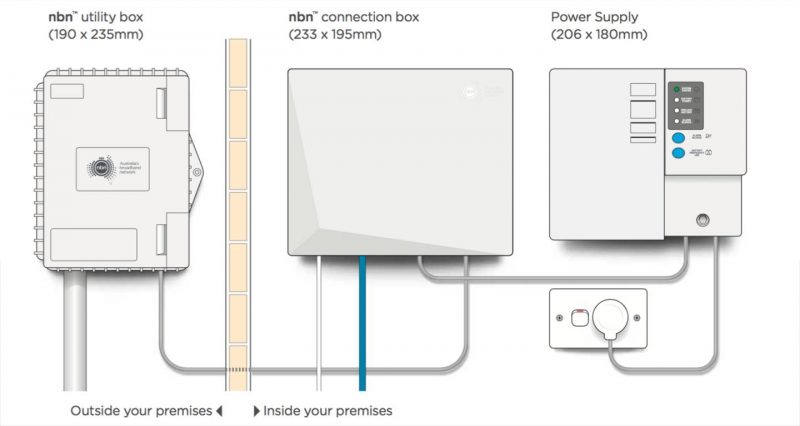 This solution is similar to FTTN, but in this case the “home stretch” cabling is the “Coaxial” lines used for your cable TV network. The NBN connection box is a special type of modem, similar to a cable modem, installed on the premises by an approved NBN installer. The ISP will then often provide a router/gateway to connect to the connection box to provide the internet and telephone services.

These connections are predominantly used in areas where it is not economical to install optic fibre. Satellite services are generally used in remote areas for this reason. For such connections, an antenna or satellite dish will be installed outside the premises and connected to a connection box/modem as in other set ups. A router/gateway is then connected to the NBN connection box to provide the Internet and telephone services. 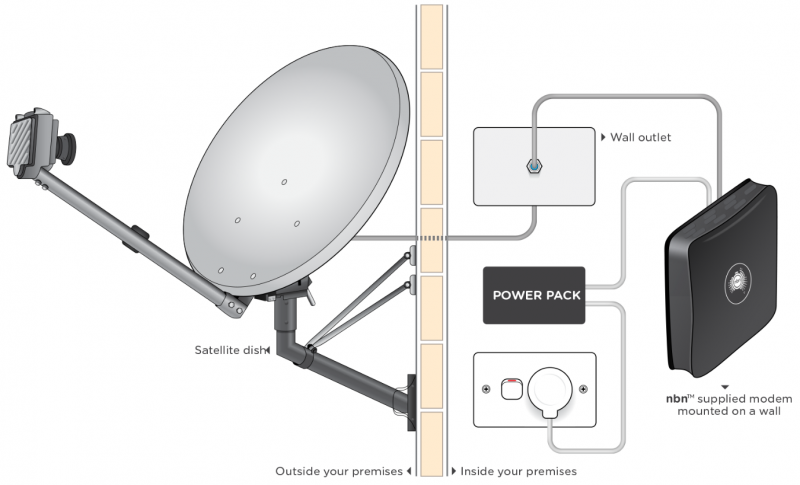